Over the past few months I've continued working on augeasproviders, a Puppet module that implements a few providers which use the Augeas configuration API to modify files. One of the interesting challenges has been testing providers, which I'm going to explain in this entry.

The challenge appears quite simple: the provider will alter the contents of a config file by adding, removing or editing a line and the spec (that is, a set of RSpec examples using the puppetlabs_spec_helper) has to test this was successful. Unlike core Puppet providers which may alter package databases and entire system state, augeasproviders operates only on individual files and so it can be run safely within a test harness.

The main flow of testing is shown above and follows ths sequence:

Now the updated fixture is complete, the contents need to be tested. Originally tests were using the Augeas API again to load the fixture and then check certain parts of the tree. Since the file has been persisted to disk using a lens that is tested and typechecked upstream, this is pretty safe and allows us to skip over implementation details such as whitespace formatting within the output.

Unfortunately it's a very verbose way of testing. Improving on this was to use the augparse utility shipped with Augeas, normally used for testing lenses transform between a sample file and a given tree. The spec was changed to generate a module for augparse that took the fixture and an "expected tree" in the spec and compared the two via the lens. 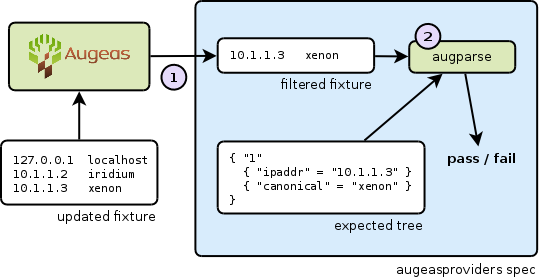 An additional feature of this was to filter the full fixture into just the line that was expected to change, meaning only part of the entire file would need to be tested against a tree. (Clearly a bad bug could cause other parts to change, but it's a trade-off to maintain the tree text for the entire file.)

The above techniques used to test the augeasproviders code could easily be adapted into other provider tests, whether or not the provider itself uses the Augeas API.

Update: the new idempotency code and all the fixes it's helped with have now been released as version 0.3.0.

Comments for this entry are now closed.